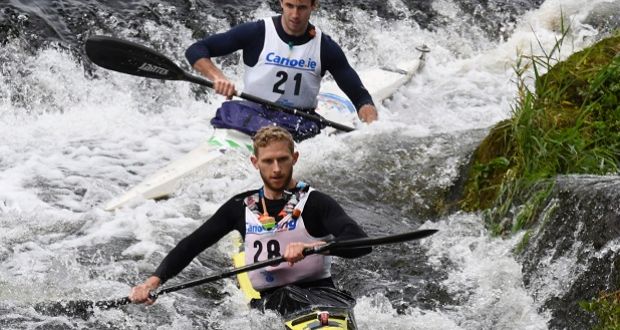 On a day when low water caused carnage, British pair Nicky Cresser and Tom Lusty were the winners of the K2 class at the 59th Liffey Descent canoe marathon yesterday (Saturday September 15)

Taking the correct line – often a matter of chance – paid off as the winner K2 pairing of Nicky Cresser and Tom Lusby discovered. ‘We were fourth into the weir but we got a good line and found we were into the lead. We thought let’s see how it goes and so we pushed on and put our heads down and no-one caught us,’ said Cresser.

Cresser, a previous runner-up in the race, found this year’s experience ‘a right slog’. In particular, the long hot summer and the resultant lack of water on the 18km course meant two extra portages. ‘We were losing a lot of time on the portages, but we were strong on the flat stretches and that’s where we made up time.’

A hazard of being stuck in a the bucket shaped seat of a narrow K2 boat for around two hours is the dead leg syndrome; both Lusby and Mads Pederson in the runners-up boat were afflicted.

‘It meant more work for me,’ said Peter Egan who was paired with Pederson. In 2016 the pair had won the race. The is time they were glad simply to finish.

‘I picked up a bug at the Duzi canoe marathon in South Africa last year and then I got pneumonia and then anaemia. It went on for months. They think I picked up some parasites at the Duzi. They can lie dormant for a while and then come back again. It meant I had to pull out of world championships and other races this year. So I’m so grateful to done the Liffey – and it was no shame to have finished second behind a team that included Tom; he’s the British No 1 over 1000m,’ said Egan.

Last year, Egan had won the mixed K2 with his sister Jenny, who earlier this summer, took bronze in the 5000m at the World Sprint Championships – a first medal ever for Ireland at this level.

This year, Jenny paired up with Salmon Leap coach Jon Simmons to whom she had became engaged a few days earlier.

It was her tenth ‘Liffey’ and by far the toughest. ‘We were about 30 minutes slower than before – it was a long, hard slog, a very different race to normal. It was really difficult to judge what line to take and we’ve taken lumps out of our paddles,’ said Egan who had finished a fighting fifth in the women’s race at the World Marathon Canoe Championships a week earlier. Next up for her is the inaugural Irish Coast Surf Ski Championships in Greystones on Saturday September 22 (10.0), which has attracted a large international entry.

For Barry Watkins, his K1 victory was a first. Last year, he had finished fourth in K2 with Jon Simmons and he had a special reason for going it alone this year. ‘I won the K2 a few years ago with Gary Mawer and I wanted to do the double – a win in both K2 and K1 – before I turned 30. My 30th birthday is next April so the pressure was on,’ said Watkins .

Like all the paddlers in the race, he found the lack of water a challenge, but decided to race it as a time trial. ‘I knew it would be slow this year. I thought it would be won in 2 hours 20 mins and I finished in 2:12 so I’m pleased.’ He hit a low between Wren’s Nest and the Palmerston weir but recovered. ‘Someone shouted that I had a five minute lead so I pushed on.’ Finishing second was his Salmon Leap clubmate Tom Brennan, winner for the past three years.

After a long summer, Watkins is planning a first ever proper holiday in Tramore, where his girlfriend’s family have a house. ‘I’ve had enough for airports for a while.’

Watkins is now in full time employment, having taken over the family butchers business in Leixlip from his father Howard, an Olympic canoeist at the 1972 and 1976 Games. ‘My life is moving on and I’m no longer a full time athlete. But I’ll continue to train – and to compete in the Liffey.’

A total of 266 boats lined out this year with 407 paddlers in all. Since the race is part of the ICF Classic Marathon Series, they came not just from Ireland but also from Great Britain, South Africa, Switzerland, Austria, Belgium, Lithuania Czech Republic, Denmark, Spain and Norway. Local clubs were well represented. Salmon Leap Canoe Club, with its clubhouse on the course, had an entry of 20 boats while Thomastown had 12 boats. With the water so low, pile-ups at the weirs were expected and so it took almost an hour before the final paddlers ground their way over the mighty weir at Straffan.

At the bottom of the weir, jagged rocked had revealed themselves. Most boats avoided them and when the got into trouble, the cheerful rescue crew from Underwater Hockey Dublin was on hand to give then a push or a helping hand.

At the back of the field came the sturdy general purpose boats and the heavy canoes propelled by single bladed paddles. Happy to have survived her first outing in one of these was Olympic rowing finalist Sinead Jennings.

Along with Jim Cassidy of Neptune Rowing Club, Jennings was recruited to paddle the Liffey by Larry Tracey, the man who brought at Irish bobsleigh team to two Olympic games in 1992 and 1996. Twenty years before that, Tracey had tried out for the Irish rowing team heading for the 1972 Olympics. While he didn’t make the team, he retained a strong interest in both British and Irishrowing.

For Jennings, canoeing proved quite different to rowing. ‘For a start, you’re going in a different direction and you don’t use your legs as much in canoeing. But you do need a strong core in both sports,’ she says. ‘Also in rowing you put your head down and go for it whereas in canoeing you have to pick your line and watch where you’re going.’

The trio had taken a look at the Liffey course before the big day, but on the day found the experience quite different. ‘With little water especially on the bottom part, it was hard. We took three swims – the first just after Straffan weir.’

The traditional outing down the 18 mile of the Liffey from Straffan to Islandbridge course requires just one portage – where you pick up the boat and run with it – at Leixlip lake. On Saturday, most boats walked down the Vanessa and Lucan weirs.

Tracey and team opted for an unusual approach to the Chapelizod weir with the result that they were reported as having dropped out of the race with just over a mile to go.

Of course, they had done no such thing, finishing sixth of the eleven open canoe triples in 4:14.24. It was a second finish for Cassidy and a first for the other two At 71, England-based Tracey was the oldest finisher of this year’s race. Iain Maclean, who was completing his 51st Liffey Descent is a mere stripling of 66.

So would Jennings do the race again. ‘Yes – absolutely!’